Yogi Adityanath Known for his firebrand Hindutva image, the 44-year-old BJP leader comes from the Rajput community and is the head Priest of  Gorakhnath temple in Gorakhpur. He has been elected as the Lok Sabha MP five times from Gorakhpur uninterrupted from 1998. 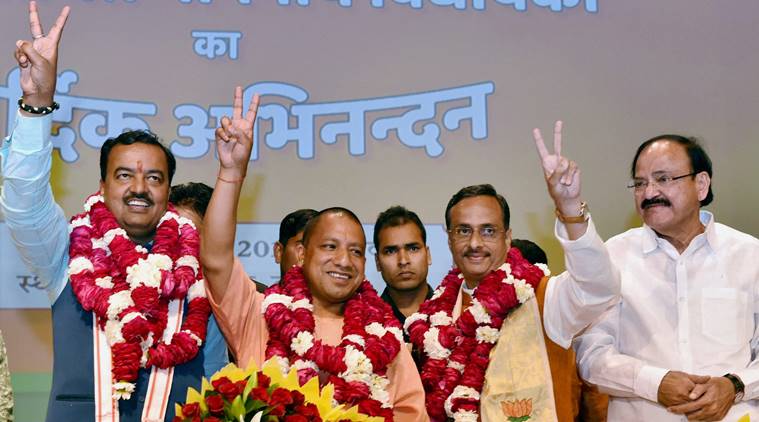 Adityanath’s rise can strengthen BJP’s ‘Hindutva’ establishment in the state, but may provide enough feed to the opposition to attack the saffron party on lines of ‘divisive politics’. BJP state chief Keshav Prasad Maurya and  Mayor Dinesh Sharma will be Adityanath’s deputies.  Whatever the impulsion would have been, smearing Adityanath as the UP chief minister was one heck of a risk to take, quite scary and cultish.

Let’s not go into the controversies that spot Adityanath’s past or be carried away by the saffron robes. The reality is, in the democracy, criminals, crooks, cultists and the religiously intolerant are all allowed to stand for elections despite the stains on their record. Often caught in controversy because of his speeches, Adityanath apparently led a purification drive for conversion of Christians to Hinduism in 2005.

He was arrested for provoking Gorakhpur riots in 2007. In 2015, Adityanath reportedly said those who oppose yoga can leave India and that they should all be ruined.

The Bhartiya Janata Party’s great success in the polls have certainly covered Adtyanath’s hold in his party.

UPSC Civil Services and IFS preliminary exam 2020 will be conducted...

PM Modi to Reshuffle His Cabinet For Last Time, How It...

Shahid Afridi should stay in his limits: Harbhajan Singh