The VIVO Pro Kabaddi is an excellent initiative taken by Mashal Sports and STAR India to prove it to the rest of the world as to how electrifying can be the game of Kabaddi. The Pro Kabaddi has certainly taken the sport of Kabaddi in India to a completely new level of excitement and popularity and it is commendable about the kind of interest people are showing in it.

The Pro Kabaddi has come a long way from where it had started once and it has had a massive success over the past few years with its previous seasons. Finally, the Pro Kabaddi is heading off to the beginning of its fifth season and this time, it is going to continue for sixteen weeks and consists of 12 teams. 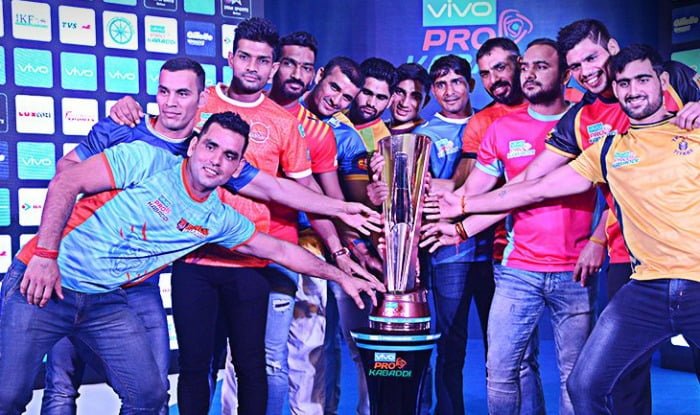 In fact, there is an addition of four new teams as Haryana Steelers, Tamil Thalaivas, Gujarat Fortune giants, UP Yoddha, etc. to the existing eight teams. The other eight teams are Puneri Paltan, Bengal Warriors, Bengaluru Bulls, Dabang Delhi, Jaipur Pink Panthers, Patna Pirates, Telegu Titans and U Mumba. This time, there is a slight change in the pattern in which the matches are going to help.

For the first time, a zone system has been introduced where in before the play offs, each team will play 7 inter-zone matches and 15 intra-zone matches. The play offs, on the other hand, comprise three qualifiers and two eliminators. Chennai will be the battle ground for the final match. The winning team gets prize money of eight crores. The tournament started on 28th July 2017 in Hyderabad and the final will be held in Chennai on 28th October 2017.

Patna Pirates is the champion and title winner of Pro Kabaddi League 2016. But this season is not going to easy because addition of few new teams.

Lionel Messi helps Barcelona to win by 4-0 against Mallorca, Highlights

Shahid Afridi should stay in his limits: Harbhajan Singh

ByteDance (TikTok) is Planning to Establish as a big Private Entity...

Why Is Bitcoin Price Increasing So Fast? Things To Know

Literacy Rate in Bihar is Good on Govt Papers & Reports...